In this paper we describe how to improve the spare parts management process in a telecommunications’ operator. Several techniques such as: neural networks, analytic hierarchy process, and software agents are used to implement a software prototype that has been validated in an operational environment with a concept trial. Better working conditions were reached by freeing up the technicians for other functions, given that they should not carry out the tedious and stressful activities included in the spare parts process. Such tasks were completed according to the time that was established in the customers’ service level agreements to avoid penalties. Operating expenditure was cut in a significant way. An increase of the overall industrial process performance was also accomplished as the spare parts management time dropped. This is, as far as we know, the first time that a combination of these techniques was applied to manage a spare parts inventory and prioritize incidents in such a complex scenario as the optical transmission network of a major telecommunications’ operator. The framework might be used in other domains such as: the hardware replacements that are required in some critical operational environments.
Anzeige
Vorheriger Artikel OAuthkeeper: An Authorization Framework for Software Defined Network
Nächster Artikel A Survey on the Use of P2P Technology for Network Management 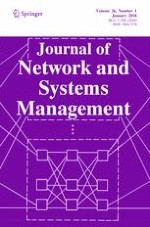 Putting Sensor Data to the Service of the Smart Grid: From the Substation to the AMI