Domes are elegant and economical structures used in covering large areas. They are built in various forms. According to their form, they are given special names such as lamella, network, and geodesic domes. In this paper, optimum topological design algorithm is presented that determines the optimum number of rings, the optimum height of crown and tubular section designations for the member groups of these domes. The design algorithm developed has a routine that generates the data required for the geometry of these domes automatically. The minimum weight of each dome is taken as the objective function. The design constraints are implemented according to the provision of LRFD-AISC (Load and Resistance Factor Design–American Institute of Steel Constitution). The optimum topological design problem that considers these constraints turns out to be discrete programming problem. Improved harmony search algorithm is suggested to determine its optimum solution. The design algorithm also considers the geometric nonlinearity of these dome structures. Design examples are presented to demonstrate the effectiveness and robustness of the design optimization algorithm developed. 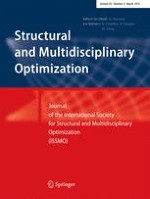