In January 2014, Northwestern University (NU) football players filed a certification election petition with the National Labor Relations Board’s (NLRB) Chicago regional office. After the NLRB ruled that they were employees having the legal right to unionize, the football players voted at the end of April 2014 with NU immediately appealing the regional director’s ruling after the balloting. In mid-August 2015, the Washington D.C. NLRB declined jurisdiction in this case, ending the football players’ unionization attempt. Because of the NLRB’s appellate ruling, however, unionization of college athletes remains a distinct possibility. Since a majority of U.S. collegiate basketball and football players are black, this paper argues that the model of unionism that should be adopted in any unionization attempt of these college athletes is civil rights unionism which represents a continuation of the historic, collective struggle of Black athletes to obtain their rights on athletic fields and in classrooms. 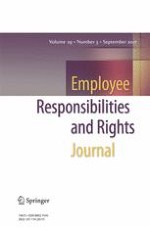 International and Comparative Employment Relations: Assessing the Global, National and Local Level Contributions to the Field of CER

Beyond Varieties of Capitalism: Implications of Global Political Changes and the Emerging Shared Economy for Comparative and International Employment Relations

A Short Essay on International and Comparative Employment Relations

‘Employment across Markets or Nations’: A Review Paper on International and Comparative Employment Relations