In this paper we present an axiomatic analysis of several ranking methods for general tournaments. We find that the ranking method obtained by applying maximum likelihood to the (Zermelo-)Bradley-Terry model, the most common method in statistics and psychology, is one of the ranking methods that perform best with respect to the set of properties under consideration. A less known ranking method, generalised row sum, performs well too. We also study, among others, the fair bets ranking method, widely studied in social choice, and the least squares method. 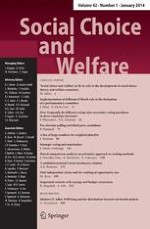 Path independent choice and the ranking of opportunity sets

A law of large numbers for weighted plurality