The effective site assessment is crucial to the successful remediation of the subsurface contaminated with light nonaqueous phase liquids (LNAPLs). Recent studies showed that large spatial volumes of the subsurface contaminated with LNAPLs could be investigated with the partitioning tracer method. This study investigated the applicability of the partitioning tracer method for detecting and quantifying refined petroleum products in a saturated aquifer containing alluvial soil or weathered granite soil. In the batch-partitioning experiments, the partition coefficients of alcohol tracers between the petroleum mixture and water were measured, and they were found to be increased in proportion to the boiling points of the alcohol tracers when the molecular weights of the alcohol tracers were similar. The sorption isotherm experiments indicated that a considerable amount of 4-methyl-2-pentanol was sorbed into Jumunjin sand (JS) or weathered granite soil (WGS). In the column experiments, it was confirmed that the partitioning tracer method could be used as a method for detecting the presence of the petroleum mixture in saturated soil, and the residual saturation of the petroleum mixture in the soil column prepared by firstly contaminating with the petroleum mixture and secondly saturating with water was measured higher than that in the soil column prepared by firstly saturating and secondly contaminating. The highest accuracy of estimation using the partitioning tracer method was found for 2-ethyl-1-butanol and the lowest accuracy was found for 4-methyl-2-pentanol. 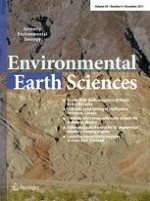