The formation of governments without a majority in parliament is a counterintuitive, albeit empirically relevant phenomenon: Minority governments make up about one-third of all governments in Europe. Yet minority governments in Central and Eastern Europe have hardly been studied. By means of a Qualitative Comparative Analysis, this article analyses the interplay of party system factors leading to the formation of minority governments in selected Central and Eastern European Countries (Bulgaria, the Czech Republic, Estonia, Latvia, Lithuania, Poland, the Slovak Republic and Romania) from the early 1990 s up to 2010. The interplay of a strong bifurcation of the party systems with a high percentage of parties excluded from coalition building or a lack of parties sharing the main policy positions turns out to be influential. 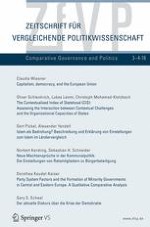 Capitalism, democracy, and the European Union