Nanotechnology has been facing multiple obstacles related to the applicability of patentability criteria. In this article, the authors addressed the novelty requirement in nanotechnology inventions in Iraqi and Malaysian patent acts. First, novelty was discussed to determine its applicability in the field of nanotechnology. Then, problems on nanotechnology patent application were presented along with some suggested solutions. The problems encountered in the patentability of nanotechnology inventions were summarized in two categories. First, the multidisciplinary nature of nanotechnology casts its shadow on the examination process in patent offices. To overcome this problem, the United States Patent and Trademark Office and the European Patent Office created new divisions to examine nanotechnology inventions; thus, this step must be followed by developing countries. In addition, with the existence of larger scaled materials and devices in prior art, three potentials have been introduced to overcome this issue. First, novel properties in nanoinventions can be demonstrated to reach the point of novelty. Second, nanoinventions can be patentable if they are carried out despite scientific problems occurring when materials are shaped in nanoscale. Third, the process of creating nanomaterials can be patentable as the bottom-up approach, which is not used in larger scaled materials. Finally, pre-disclosure must be considered as an enabling disclosure, which enables a skilled man in the art to put the nanoinvention in practice. 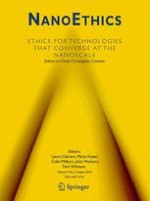 Governing Nanotechnology in a Multi-Stakeholder World

Discernment and Denial: Nanotechnology Researchers’ Recognition of Ethical Responsibilities Related to Their Work