» Jetzt Zugang zum Volltext erhalten
Wichtige Hinweise
The research on which the present study is based was conducted in the framework of the Department of Economics and Management of the Università degli Studi di Florence, and the Marketing and Internationalization laboratory (LabMI) at the PIN of Prato (Italy). 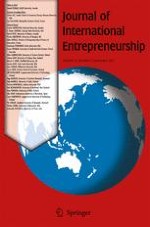 Towards a conceptual multilayered framework of international entrepreneurship

Entrepreneurial intentions—theory and evidence from Asia, America, and Europe