Pectin-graft-poly(2-acrylamido-2-methyl-1-propane sulfonic acid) (Pec-g-PAMPS) gel was made in the form of beads by subjecting the solution containing pectin (Pec), 2-acrylamido-2-methyl-1-propane sulfonic acid (AMPS) and ammonium peroxodisulphate to microwave irradiation followed by ionic crosslinking in CaCl2 solution. Gel beads containing silver nanoparticles were also prepared by the same method but with the addition of silver nitrate and trisodium citrate solution prior to microwave irradiation. The synthesized Pec-g-PAMPS and its silver nanocomposite (Pec-g-PAMPS-Ag) gel beads were characterized using FTIR, TGA, XRD, SEM, EDS and TEM techniques. The effect of incorporation of Ag NPs on the biological activity of Pec-g-PAMPS was studied by zone inhibition method considering two bacterial strains namely E. coli and B. subtilis. The nanocomposite gel exhibited higher antibacterial activity compared to the parent gel, which was comparable with the standard drug, Streptomycin. The in vitro drug release profiles of the parent gel and its composite were analyzed using Ketoprofen (KF) to study the effect of incorporation of Ag NPs on the drug release behavior of the Pec-g-PAMPS. The presence of silver nanoparticles enhanced both swelling of the gel beads and the extent of drug release significantly. 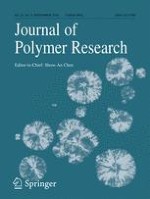