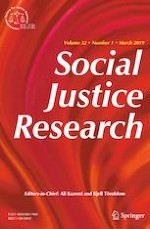 Operationalizing a Conceptual Model of Colorism in Local Policing

Is Justice More Important than Would Be Expected? The Role of Justice in Management Control Systems to Generate Goal Congruence, Trust in Managers and Fairness Perceptions

Correction to: Operationalizing a Conceptual Model of Colorism in Local Policing