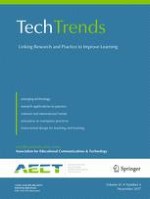 First Principles of Attitudinal Change: a Review of Principles, Methods and Strategies

Learning through Making and Maker Education

Conversations with Innovators in Learning and Technology: Kinshuk

Optimism vs. Realism with Regard to Educational Technologies