Real-time interaction in virtual environments composed of numerous objects modeled with a high number of faces remains an important issue in interactive virtual environment applications. A well-established approach to deal with this problem is to simplify small or distant objects where minor details are not informative for users. Several approaches exist in literature to simplify a 3D mesh uniformly. A possible improvement to this approach is to take advantage of a visual attention model to distinguish regions of a model which are considered important from the point of view of the human visual system. These regions can then be preserved during simplification to improve the perceived quality of the model. In the present article, we present an original application of biologically-inspired visual attention for improved perception-based representation of 3D objects. An enhanced visual attention model extracting information about color, intensity, orientation, as in the classical bottom-up visual attention model, but that also considers supplementary features believed to guide the deployment of human visual attention (such as symmetry, curvature, contrast, entropy and edge information), is introduced to identify such salient regions. Unlike the classical model where these features contribute equally to the identification of salient regions, a novel solution is proposed to adjust their contribution to the visual-attention model based on their compliance with points identified as salient by human subjects. An iterative approach is then proposed to extract salient points from salient regions. Salient points derived from images taken from best viewpoints of a 3D object are then projected to the surface of the object to identify salient vertices which will be preserved in the mesh simplification. The obtained results are compared with existing solutions from the literature to demonstrate the superiority of the proposed approach. 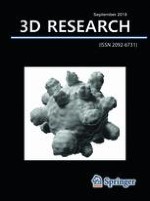