Allocating resources to WiMAX (Worldwide Interoperability for Microwave Access) users in a rectangular region is often known as burst mapping. The WiMAX standard only specifies a horizontal-strip-based mapping for uplink transmission; the downlink (DL) mapping is not specified. Previous studies have proposed various solutions for DLs, and yet, only a few consider the power of the subchannel (i.e., a group of subcarriers). This paper examines a Dynamic Power Burst Mapping (DyPBM) technique whereby the subchannel qualities and the DL rectangular mapping are considered. This research is then extended to the fragmentation of Medium Access Protocol (MAC) Packet Data Units (PDUs) during burst mapping, which has yet to be highlighted in the literature. The simulation results show that the use of DyPBM results in few unused slots (carrying no data) within the data regions in the unfragmented PDU case. Nevertheless, numerous unallocated slots (free slots) within the frames are found, resulting in achievable goodput that is similar to that of other non-dynamic techniques. When the PDUs are variably fragmented subject to the area of free spaces within the frames, the numerical results show a goodput increment up to 0.7 Mbps. These results indicate that DyPBM significantly relies on the MAC PDU fragmentation to achieve high performance. The trade-off is increased system complexity compared with other techniques. 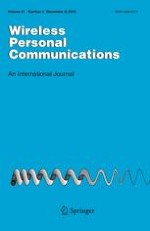 Cryptanalysis of a Hash Based Mutual RFID Tag Authentication Protocol

Evaluation of Conventional and Wavelet Based OFDM System for ICI Cancellation

On the Security of a Self-Healing Group Key Distribution Scheme