Self-consolidating concrete (SCC) is a stable and cohesive high consistency concrete mix with enhanced filling ability properties that reduce the need for mechanical compaction. Limited standards and specifications have been reported in the literature on the structural behavior of reinforced self-compacting concrete elements. The significance of the research presented in this paper stems from the need to investigate the effect of enhanced fluidity of SCC on the structural behavior of high strength self-consolidating reinforced concrete beams. To meet the objectives of this research, twelve reinforced concrete beams were prepared with two different generations of superplasticizers and designed to exhibit flexure, shear, or bond splitting failure. The compared beams were identical except for the type of superplasticizer being used (second generation sulphonated-based superplasticizer or third generation polycarboxylate-based superplasticizer). The outcomes of the experimental work revealed comparable resistance of beam specimens made with self-compacting (SCC) and conventional vibrated concrete (VC). The dissimilarities in the experimental values between the SCC and the control VC beams were not major, leading to the conclusion that the high flowability of SCC has little effect on the flexural, shear and bond strengths of concrete members. 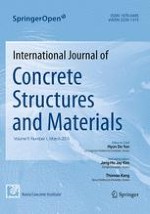 Correlation Between Bulk and Surface Resistivity of Concrete