Control of phase separation length scales of polymers in a solution-processed film of binary (two-component) polymer blends is the most important step to realize significant photocharge generation and transport efficiencies leading to efficient solar cells. The dynamics of phase segregation becomes more complex in ternary (three-component) polymer blends. In the three-component blend, one component serves as sensitizer, and other two act as donor and acceptor polymer. The sensitizer absorbs photons and the energy is quickly transferred to the host donor. Subsequently, efficient charge transfer occurs at the host donor/acceptor interface. Depending on the relative amount of phase segregation between sensitizer/donor, sensitizer/acceptor and donor/acceptor, the different photophysical mechanisms (viz. energy transfer and charge transfer) are either boosted or suppressed. The correct kind of morphology should allow efficient energy transfer at the sensitizer/donor interface followed by efficient charge transfer at the donor/acceptor interface. We attempt to address these requirements by modulating the nanomorphology of a ternary blend via tailoring the non-solvent concentration in the ternary polymer blend solution. Here, we study the effect of non-solvent mixing and resultant film morphology is characterized by wide-field local photocurrent imaging and photoluminescence imaging in a confocal microscope set-up. 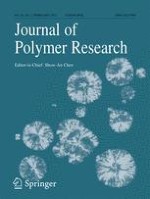 The effects of MWCNT length on the mechanical, crystallization and electromagnetic interference shielding effectiveness of PP/MWCNT composites