Silane/TiO2 hybrid coatings were prepared on 304 stainless steel (304 SS) by a simple dipping method, where the silane is d-γ-methylacryloxy propyl trimethoxyl silane (CH2=C(CH3)COO(CH2)3Si(OCH3)3, MPMS). The photogenerated cathodic protection and invalidation of the hybrid coatings were evaluated by microstructure and electrochemical characterization. The coupling agent MPMS reduced the agglomeration of the nanosized TiO2 powders and promoted the adhesion of the coatings. Barrier protection of the coupled metal was promoted for the hybrid coatings in a short corrosion time. However, MPMS decreased the carrier concentration of the TiO2 electrode due to the large interface resistance. As a result, the corrosion potential shifted positively and the photogenerated cathodic protection decreased. In long-time corrosion, the hybrid coatings became invalid because of the accumulation of electropositive holes that may weaken the Ti–O bond and destroy the barrier effect. 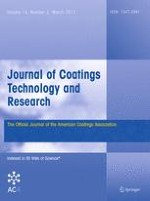