A range of nanocomposites were prepared using cellulose nanowhiskers (CNWs) and poly(lactic acid) (PLA) via a solvent casting process. Acid hydrolysis process was used to produce CNWs from bleached cotton. Structural morphology and surface topography of the CNWs and nanocomposites were examined using transmission (TEM) and scanning electron microscopy. TEM images revealed rod-like whiskers in the nano-scale region which were dispersed within the PLA matrix. The presence of the functional groups of CNWs and PLA were confirmed via FTIR analysis. Tensile tests were conducted on thin films and the nanocomposites containing 1 wt% CNWs showed a 34 and 31% increase in tensile strength and modulus, respectively, compared to pure PLA. The dynamic mechanical analysis showed that the tensile storage modulus also increased in the visco-elastic temperature region with increasing CNWs content in the nanocomposites. Thermogravimetric analysis showed that all the materials investigated were thermally stable from room temperature to 210 °C. A positive effect of CNWs on the crystal nucleation of PLA polymer in the nanocomposites was observed using differential scanning calorimetry and X-ray diffraction analysis. The degradation profiles of the nanocomposites in deionised water over 1 week revealed a mass loss of 1.5–5.6% at alternate temperatures (25, 37 and 50 °C) and at the same conditions the swelling ratio and water uptake were seen to increase with CNWs content in the nanocomposites, which was strongly influenced by the presence of crystalline CNWs. 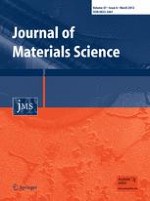 Characterization of granular silicon, powders, and agglomerates from a fluidized bed reactor