The local surface plasmon resonance effect of Au nanorods (AuNRs) can help improve the performance of polymer solar cells (PSCs). Polydopamine (PDA), as a new electron transfer layer (ETL) modifier, has also attracted attention. Electron beam irradiation can further control the molecular structure and morphology of PDA and optimize its binding with ZnO. In this study, AuNRs with different aspect ratios (ARs) were prepared by the seed growth method. Then, the AuNRs with different ARs were selected to modify the ZnO ETL of PSCs based on the inverted structure of PTB7:PC71BM. The short current density (Jsc) of the long AuNR-modified solar cell (AR = 4.18) reached 10.81 mA/cm2, and the PCE reached 4.57%. The PDA/AuNR composite films before and after electron beam irradiation were further used to modify the ZnO ETL. The Jsc and PCE of the PDA/AuNR composite-modified device increased to 11.97 mA/cm2 and 4.75%, respectively. The PCE of the device with 50 kGy-irradiated PDA/AuNR composite modifier reached 5.66%, which was 1.59 times of the device without PDA/AuNRs. 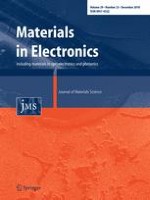 Investigation on luminescence properties of BaY2Si3O10:Er3+/Ho3+–Yb3+ for optical temperature sensing