The most commonly discussed nonverbal indicators in scientific literature about subjective cues to deception are gaze aversion, smiling, self-adaptors, illustrators, body movements, etc. One of the methods for studying beliefs is the closed question method (CQM). The CQM studies beliefs through written questionnaires in which facial cues are described with words. In the present study, the CQM was adapted to the study of facial expressions by using a photographic questionnaire. Indeed, instead of written descriptions in a questionnaire, we used photos of facial expressions to improve the classification of facial cues with contrastive participants (police officers and civilians). Fifty-four standardized photos of facial movements based on the facial action coding system were used as stimuli. The task was to determine whether a particular expression was more or less present during a lie. Results highlight cues perceived as more present (e.g., lip wiping) or less present (e.g., fear) during a lie. Only a few differences emerged between civilians and police officers (e.g., head lowering) suggesting that they had similar beliefs. The accuracy of police officers’ beliefs was better than chance, but remains low for such a professional. Results revealed many new beliefs about deception which can be of help in updating police training on this topic in order to decrease the number of false alarms about lies. 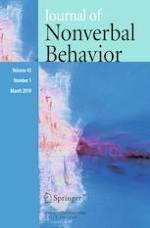 Nonverbal Markers of Lying During Children’s Collective Interviewing with Friends

You are What You Wear: Unless You Moved—Effects of Attire and Posture on Person Perception