Polycyclic aromatic hydrocarbons’ (PAHs) concentrations in bulk samples are commonly used to assess contamination but PAHs are unevenly distributed among particle-size fractions. Seventeen urban surface soil samples from the city of Xuzhou, China, were collected and then fractionated into five size fractions (2,000–300, 300–150, 150–75, 75–28, and <28 μm). The concentrations of 12 US EPA PAHs were measured using gas chromatograph/mass spectrometry in various fractions, and the bulk soil samples and distribution patterns of PAHs in different particle-size fractions were investigated. The mean concentration of total PAHs in bulk soil samples was 1,879 ng/g. The median concentrations for all individual PAH were higher for the 75–2,000 μm fraction than for the <75 μm fraction. The distribution factors for various PAHs in <28 μm soil fraction were closely correlated (r = −0.661, p < 0.019) to bulk soil fugacity capacity. The values of PAH isomer indicated that traffic emissions might be the major origin of PAHs in Xuzhou surface soils. Spearman correlation analysis was performed and the result suggested that soil organic carbon might be a factor controlling the concentrations of PAHs in soils. 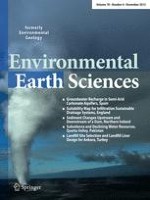 Chemical stabilization of metals in the environment: a feasible alternative for remediation of mine soils

Assessment of heavy metals contamination in deposited street dusts in different urbanized areas in the city of Ma’an, Jordan

Hydrogeochemistry and arsenic contamination of groundwater in the Rayen area, southeastern Iran