From 1 year to the next increasing demand for polyurethane materials is observed. Depending on the kind of the foam, the materials are exploited in many fields, and that is why it is so important to improve their properties and the way of their production.
It should be emphasized that the typical polyurethane foams loose their properties most commonly above the temperature 100 °C and they are not resistant to higher temperatures [ 1]. It considerably limits their application. In addition, typical polyurethane foams are combustible. The high content of carbon and hydrogen, large specific surface area and cellular structure make polyurethane foams very low resistant to burning. To reduce the risk of the inflammability foams, flame retardants are used. Flame retardants are substances which delay polymer ignition by increasing their ignition temperature, slowing the spread of flame and products of combustion and reducing the formation of smoke. Halogen-containing hydrocarbons, organophosphates, organohalogenophosphates, compounds of nitrogen atoms, and organoboron compounds and metal hydroxides are used as the flame retardants [ 2].
Anzeige
Introducing additive flame retardants for the foam compositions often causes deterioration of the polyurethane foams’ properties, therefore, more effective and safe is the use of the reactive flame retardants.
Therefore, new polyols are sought after which will play double role and will improve the properties of polyurethane foams.
In recent years, much research has been devoted to the synthesis of the so-called polyols from renewable raw materials, i.e., derivatives of vegetable oils (rapeseed oil, sunflower oil, palm oil, coconut oil, soybean oil [ 3‐ 5]). They are esters of glycerol and higher unsaturated fatty acids. Oligoesterols are most commonly prepared from them by epoxidation or other oxidation of double bonds, etc. [ 6].
Foams prepared from oligoesterols are more thermally stable [ 7].
Anzeige
Furthermore, the glycolysis products of PUR waste [ 8‐ 10] and other materials may also be used as polyols. In industrial scale, the polyol from recycled poly(ethylene terephthalate) is used in the preparation of full valuable, porous polyurethane materials [ 11].
Due to the facts I decided to use oxamidoester derivatives as polyol components to improve the properties of the foams.
In polymer chemistry, oxamic acid (oxalic acid monoamide) and its derivatives [ 12‐ 14] may be used for modification of the structure and properties of materials. According to the literature data, the oxamidoester group was being introduced into polymer chains mainly using diethyl oxalate [ 15, 16].
Searching for new polyols for obtaining polyurethane foams, it was decided to synthesize N- and O-(hydroxyalkyl)-substituted bisoxamidoesters, and then use them to obtain oligoetherols containing bisoxamidoester group.
Izumi et al. [ 17] reacted 2-methyl-2-propylpropane-1,3-diol with oxalyl chloride and the product obtained was reacted with ammonia. In this way, it was obtained an oxamidoester with unsubstituted amide groups (I).

(1)
Following the model of this synthesis it was decided to obtain N-(hydroxyalkyl)-substituted bisoxamidoesters, and then to subject them to reactions with alkylene carbonates. In this way, the new polyol components for polyurethane foam syntheses have been obtained, and then using 4,4′-diphenylmethane diisocyanate (MDI), polyurethane foams were obtained and their properties were examined.

10 g of proper hydroxyalkyl oxamidoester derivative, 0.1 g of a surfactant (L-6900 Silicon, Momentive, USA), 0.8–3.2 wt% of triethylamine (TEA, catalyst) and 2 wt% of water (Table  5) were inserted into a 250-cm 3 polyethylene cup. Having thoroughly mixed all the components, a properly calculated [ 19] amount of 4,4′-diphenylmethane diisocyanate (with a triisocyanate additive) was added and later on—experimentally corrected. Next, an isocyanate was added up, it was vigorously agitated by a mechanical stirrer at a constant rotation speed of 2000 rpm (stirrer, Ver. VOS PC S40, Croatia). When the reacting mixture was homogeneous, it was transferred to a cubic mold of 10 × 10 × 15 mm size. The creaming took place only in the mold. The creaming time was measured from commencement of mixing to start of raising. Next, raising and drying time of the foams were measured, too. With the aim of the next tests, after 48 h of foams’ seasoning in room temperature, fittings were cut out of them.

Hydroxyl number (HN) of the obtained polyols was determined with the use of acetic anhydride and pyridine [PN-EN ISO 2554].
Thermogravimetric analysis (TG and DTG) of the above-mentioned products was made in a ceramic pan in the following registration conditions: temperature range: 20–600 °C, registration time: 60 min, sample weight: 1–2 mg, atmosphere: nitrogen, with the use of a derivatograph Termowaga TGA/DSC, Mettler.
The polyols’ molar masses [number-average ( \( \bar{M}_{\text{n}} \)), weight-average ( \( \bar{M}_{\text{w}} \)), z-average ( \( \bar{M}_{\text{z}} \))] were determined with the use of a gel chromatograph Viscotec T60A equipped with RI detector (of refractive index). Separation were performed by means of two independent columns: PSS SDV (of 7.8 mm × 300 mm dimensions), accompanied by TSK deposits of 100 and 1000 Å pore diameter and the following recording conditions: 25 ± 0.1 °C, eluent flow rate: 1 cm 3/min, injected sample size: 20 μl, polymer concentration in solution: 5 mg/cm 3, analysis time: 30 min, eluent: THF (distilled from above sodium); calibration was performed on the basis of typical polystyrene and branched references.
The following physical properties of the obtained polyols were determined: density with the pycnometric method [ 20], viscosity using Höpler’s viscometer [ 21] and surface tension with the use of torsion balance [ 22]. Measurements were carried out in a temperature range of 20–80 °C.
The elemental analysis (C, H, N) of foams was made by means of an element analyzer Vario EL III C, H, N, S and O, manufactured by Elementar.
The IR spectra of the foams were recorded using potassium bromide tablets on PARAGON 1000 FTIR spectrometer, produced by Brucker.
The following polyurethane foams’ properties were determined: apparent density [PN-EN ISO 845], water uptake [PN-EN ISO 2896], dimensional stability [PN-EN ISO 2796], glass transition temperature (by means of DSC method), thermal stability measured by weight loss during monthly annealing at 150 and 175 °C (1 month is required to acquire stable weight), compressive strength [PN-93C/89071, ISO 884:1978] with the use of strength testing machine, Instron company, with measuring heads 30 and 100 kN 1 N coupled to optical strain measurement system, Aramis, GOM company, thermal conductivity [PN ISO 4589-2:1999] and oxygen index [PN-EN ISO 11357-1].
The microscopic observation of foams was performed at optical microscope Nikon Eclipse LV100 POL, camera Digital Sight DS-5Mc, objective 2.5 or 5 × L Plan. Microscopy measurements were performed in the Biophysical Laboratory of the Department of Physic of Rzeszow University of Technology. The Laboratory has been constructed in the frame of UE Polish Integrated Regional Operation Program.
Measurements of DSC foams were made with the use of DSC822e calorimeter, manufactured by Mettler Toledo. About 2–3 mg of the foam was put into an aluminum pan. The measurements were carried out from 20 to 200 °C at the heating rate of 10 °C/min, followed by cooling at 10 °C/min in nitrogen atmosphere [PN-EN ISO 13165:2003]. Tg was collected from the second run.
Tests on thermal conductivity and heat capacity coefficients were made at room temperature and by means of Isomet 2114 (Applied Precision, Slovakia), portable measuring apparatus. A rebate probe was used in the experiments as well—it required sample of 40 mm diameter and 80 mm length [PN ISO 4589-2:1999].
Oxygen index experiment, based on minimal oxygen concentration in oxygen and nitrogen mixture, in which a sample of tested material set in measuring column lights a fire longer than 3 min, was performed with the use of a device destined for the oxygen index determination (Fire Testing Technology Limited, Great Britain) [PN-EN ISO 11357-1].

This is a white, crystalline substance of melting point ca. 50 °C. The composition and the structure of the substance were confirmed by elemental and spectroscopic (IR, 1H-NMR) analysis, respectively (see “ Experimental”).

The products containing bisoxamidoester groups were also tested as polyol substrates for polyurethane foam syntheses. The foaming with 4,4′-diphenylmethane diisocyanate (MDI), containing 30 wt% of triisocyanates was carried out in a small laboratory scale. The investigations aimed at determining the influence of the optimum amount of catalyst, isocyanate, foaming agent (water), kind of hydroxyalkyl derivative on the course of the foaming.
It was preliminary found that 2 wt% water content in polyol should be used and such percentage was used for the foaming experiments (Table  5). The amount of TEA (catalyst) depends on the kind of the derivative used. For polyols obtained with the smallest excess of EC, it was not necessary to use TEA. It was found that polyols obtained with higher (14- and 20-molar) excess of EC are not suitable for polyurethane foam syntheses. In turn, the product obtained at 8-molar excess of PC, containing secondary hydroxyl groups, is less reactive toward isocyanate groups and requires the use of TEA in the amount of 2.4/100 g of polyol.
Table 5
The influence of the composition of reaction mixture on the course of foaming
a4,4′-Diphenylmethane diisocyanate
bTriethylamine
cCreaming time: the time from commencement of mixing to start of raising
dRising time: the time from commencement of rising to reaching final dimension
eDrying time: the time from the cessation of foam rising to time when adhesion to powder substances ceases
It was observed that the creaming time, particularly rising and drying time, is definitely shorter than that of in case of polyols obtained with the excess of EC (Table  5, composition 1 and 7). The creaming time is usually ca. 23 s for products of EC hydroxyalkylation and is 1.5 times shorter than that for polyols obtained using PC. The differences in the rising time are even bigger. The foams obtained from EC polyols raise 3 times faster than those from PC polyols. The foams obtained from hydroxyethyl derivatives containing bisoxamidoester groups are practically dry directly after the growth, whereas those from PC polyols need to dry for approx. 80 s (Table  5, composition 1 and 7).

Properties of the polyurethane foams 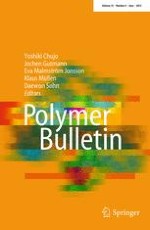 Erratum to: Complexes of hybrid copolymers with heavy metals: preparation, properties and application as catalysts for oxidation

Synthesis and self-assembly of new amphiphilic thermosensitive poly(N-vinylcaprolactam)/poly(d,l-lactide) block copolymers via the combination of ring-opening polymerization and click chemistry