Irradiation-induced pore structure evolution of graphite is especially important for its applications in molten salt reactors. If irradiation expands the pores, more salt will intrude into graphite components, which is undesired. In this study, multi-energy argon ions were used instead of neutrons to introduce displacement damage in IG-110 graphite at 600 °C, in order to investigate pore structure evolution of graphite during irradiation. About 71% of the pores shrank after irradiation to 21 dpa, which was proved to be a result of c-axis swelling of graphite crystallites. In contrast, only 12% of the pores expanded. The total area of gas-escape pores gradually decreased to 89% at 21 dpa. At the turnaround dose and beyond, extensively distributed submicron pores were observed, indicating an increase in newborn porosity. Combining the evolution of original pores and newborn pores, a model depicting the overall porosity’s evolution during irradiation is given in this study. Because the original porosity decreases continuously with dose and newborn pores are small in sizes, this study strongly suggests that irradiation will not facilitate salt intrusion into graphite. 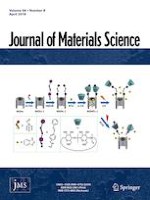 The formation mechanism of reverted austenite in Mn-based maraging steels