Textile waste jute was activated by H3PO4 and ZnCl2 for reuse as activated carbon. Thermal degradation behavior of jute, impregnated jute and activating agents via thermogravimetric analysis were conducted first. Yield and iodine adsorption number were employed to determine the optimal activation conditions. As a result, activation by H3PO4 was best conducted at 700 °C for 90 min with an impregnation ration of 1.0 while conditions for ZnCl2 were 500 °C, 60 min and impregnation ratio of 1.0. That is, the best activation conditions varied with activating agents. So were the properties of resultant jute-based activated carbons. H3PO4 activation produced an activated carbon that was mostly mesoporous while that by ZnCl2 was more even in micropore and mesopore volumes as proven by pore volume distribution analysis. In addition, both carbons were abundant in surface functional groups which could be beneficial for adsorption of pollutants. Overall, jute could be effectively recycled to produce activated carbon that boasted excellent surface chemistry and textual properties. 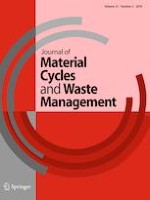 The importance of sustainable phosphorus management in the circular economy (CE) model: the Polish case study