Since fossil fuel sources across the globe are fast depleting, renewable and non-conventional energy sources are urgent to explore to ensure the world is not threatened by a vacuum of energy. Biomass is generally defined as any hydrocarbon material, mainly consists of carbon, hydrogen, oxygen, and nitrogen [ 1]. It has been recognized as a major world renewable energy source to supplement declining fossil fuel resources [ 2]. However, the use of first-generation biofuels, which have been mostly taken from food and oil crops, such as rapeseed oil, sugar cane, sugar beet, maize, vegetable oils, and animal fats [ 3], has generated a lot of controversies, primarily because of their impact on global food markets and food security [ 4]. Hence, it drives the need to base non-food biomass resource biofuels. As a result, interests in aquatic biomass as the feasible fuel source have recently gained prominence. One of the potential aquatic biomass for fuel is microalgae.
Microalgae will be potential as an important energy source in the future due to their potentially abundant, renewable, and CO 2 neutral fuel [ 5]. Compared with wood and land crops, microalgae are able to reproduce their biomass very rapidly and are very rich of oil content. Biomass productivity of microalgae can be 50 times more than that of the fastest growing terrestrial plant, namely switch grass [ 6]. Microalgae multiply their biomass about 1–3 per day [ 7] and theoretically can produce oil per hectare 100 times higher than that of terrestrial crops [ 8]. In the appropriate culture media, some algae can achieve very high lipid content, such as Chlorella emersonii [ 9], Neochloris oleabundans [ 10], and Scenedesmus abundans [ 11], which their lipid content up to 63, 56, and 67 %, by dry weight, respectively. Microalgae consume 2 g of CO 2 to produce 1 g of biomass when considering the glucose conversion into starch or lipids. Thus, by assuming a growth rate of 50 g/m 2/day, it is possible for one hectare pond algae to absorb up to one ton of CO 2 per day [ 12]. Thereby, microalgae cultures will neutralize CO 2 from their combustion.
Anzeige
Beyond the potential of microalgae for fuel in the future mentioned above, harnessing energy from microalgae must be considered in full transparence of physical and chemical properties. These properties are essential parameters for biomass fuel feedstock because they will affect both their combustion characteristics and proper handling modes in the furnace. The moisture content is very important property affecting the burning characteristics of biomass [ 13], mainly owing to its necessary of energy for releasing before a combustion process takes place. Hence, it will reduce the temperature in the combustion chamber. To ensure the sustained combustion process, this parameter must be exactly well known. Volatile matter content has also been indicated to affect the thermal behavior of solid fuels. The rate of volatile releases and its quantity determine the flame ignition, stability, and temperature profile in the radiation part of the furnace. Chemical properties of biomass are also a critical parameter as they determine the amount of energy contained in biomass. Likewise, the presence of the inorganic component in the biomass influence in the formation of ash, slag deposits, corrosion of boiler components, and aerosol [ 14]. Generally the inorganic constituents of biomass are Si, Ca, K, Na, Mg, S, P, Fe, Mn, and Al [ 15, 16], and the concentration of each element in biomass varies in accordance with the kind of species and growing environment. During combustion processes, part of the ash-forming compounds in the biomass mainly alkali metals and chlorine are volatilized into a gas phase, such as HCl(g), KCl(g), (KCl) 2(g), K 2SO 4(g), KOH(g), K(g), Na 2SO 4(g), and NaCl(g) [ 17, 18]. As cooling proceeds in the heat exchanger section of boilers, subsequent nucleation or condensation lead to the gases, together with solid phase submicron particles released from the fuel bed, form a large part of the fine ash particles. Otherwise, the compounds composed of Mg, Ca, Fe, Al, and non-metallic elements such as S, P, and Si are relatively more stable and less volatilized [ 19]. The fractions of non-volatilized compounds are remaining in the charcoal, and through a process of coalescence or melting form ash particles with a variety of shapes, sizes, and compositions, parallel to the characteristics of the parent material [ 20]. Therefore, to make biomass thermal conversion processes effective, these parameters must be clearly studied.
This work aimed to provide fundamental information for biomass fuel feedstock of N. oculata by investigating the biomass growth in the culture medium and its properties which affect the performance of biomass fuel including the calorific value, moisture content and physicochemical properties. The Fourier transform infrared (FTIR) spectroscopy analysis of both biomass and its residue were also conducted to identify the cellular macromolecular content.

The description of species

N. oculata is a species of a genus Nannochloropsis. It is a unicellular small green alga, found in both marine and freshwater [ 21, 22]. This alga is characterized by spherical or slightly ovoid cells [ 23] with a diameter of 2–5 μm [ 24] and absence of chlorophyll b and cellular xanthophyll pigment [ 25‐ 27]. There is one chloroplast in each cell, without pyrenoid. Chloroplast endoplasmic reticulum is continuous with the nuclear envelope. Inside the chloroplast are lamellae, consisting of three thylakoids for each. Only one chlorophyll is present, namely chlorophyll a and the main pigment is violaxanthin. Its cell walls are composed of two components, the fibrillar component and the amorphous component. Fibrillar part forms the skeleton of the wall, which is embedded in the matrix of amorphous component. The most common fibrillar component is cellulose, a polymer of 1,4 linked β- d-glucose. An amorphous mucilaginous material is arranged from proteins, lipids, and polysaccharides. Occasionally, silica, calcium carbonate, or sporopollenin is also present as encrusting substances [ 28].
Nannochloropsis is widely distributed in oceans worldwide. It plays significant roles in the global carbon and mineral cycles [ 29]. This microalgae contains rich proteins, pigments, and polyunsaturated fatty acids [ 26, 30, 31], and it is commonly used in aquaculture as feed [ 32, 33]. In recent years, Nannochloropsis has been proposed as an excellent candidate for biofuel production [ 34, 35].
Anzeige

The N. oculata strain was obtained from the Institute of Brackish Water Aquaculture (BBAP) Situbondo, East Java, Indonesia. This species was cultured in an open pond with seawater medium in which its salinity and pH were 34 ‰ and 8.6, respectively. The culture medium was enriched with fertilizers whose composition was presented in Table  1. The use of fertilizers was 1 ml/l of the cultivation medium. The cultivation had been performed for 7 days.
Table 1
The composition of fertilizers used for culturing Nannochloropsis oculata

The biomass productivity of N. oculata was evaluated daily by means of counting the number of cells in the culture medium using hemocytometer and optical microscope (CH2 Olympus optical Co. Ltd, Tokyo, Japan). Measurement was carried out every day at 11:00 AM during the cultivation period. Each measurement was repeated 3 times and the results were averaged.
The N. oculata specific growth rate, which was the change of the natural log of the cell number density ( ) with time ( t), was calculated from the slope of the linear regression of time (days) and cell density (cells/ml) [ 36]:
(1)
where is cell density at time ( t), and is cell density at the start of the exponential phase ( ).
The time required to double the cell of N. oculata, termed the doubling time (day), could be estimated by equation:
(2)

The biomass was harvested by precipitating it with caustic soda (NaOH); then it was filtered and washed twice with distilled water. Subsequently, the biomass sediment was dried in an oven at 80 °C for 24 h. The dried microalgae chunks were pulverized by the mortar to be fine particles and then finally stored in desiccators.

Energy-dispersive X-ray (EDX) spectrometry was used to determine the chemical composition of algal biomass. Scanning electron microscope images were taken by FEI Inspect S50 equipped with X-ray microanalysis capabilities (AMETEK EDAX TSL). Samples were gold coated to minimize the effect of electron charging of the surface, which could distort the images.

The total lipid of N. oculata was extracted using a Soxhlet extractor system. Approximately 3 g of biomass powder was weighed into a cellulose thimble inside the extraction chamber. A total of 150 ml pure n-hexane was used to extract the lipid for 6 h at the rate of 10 refluxes per hour to achieve maximum extraction efficiency. The extracted lipid was measured after removing the solvent using vacuum rotary evaporator to evaporate the n-hexane at 35 °C for 60 min, and then lipid content was calculated. The adopted Soxhlet unit description could be found in different literature [ 37].

The moisture, volatile matter, fixed carbon, and ash content of the dry algal biomass were determined by thermal gravimetric analyzer (STA PT1600 by Linseis). The adopted method is basically described by Beamish [ 38] and Mayoral et al. [ 39]. Approximately 20 mg samples were loaded into an Al 2O 3 ceramic crucible. Initially, the sample was kept isothermally at 25 °C for 8 min. The heating ramp was set at 50 °C/min, from 25 °C up to 125 °C then held for 3 min. A new 80 °C/min heating ramp was programmed up to 950 °C and maintained at that temperature for a total duration of 40 min. The whole process was done using Argon as purge gas to guarantee a non-oxidative environment. However, this gas was then switched to the air atmosphere when it was achieved isothermally at 40 min. Once a constant mass loss was reached, the isothermally final temperature was maintained for a total duration of 65 min in the air atmosphere to complete the combustion process. The moisture, volatile matter, fixed carbon, and ash were calculated by the difference from slope to slope of thermogravimetric (TG) curve.

The heating value of microalgal biomass was evaluated by an equation proposed by Nhuchhen and Abdul Salam [ 40]. This calculation was based on values resulted from the proximate analysis.
(3)
where, VM, FC, and A were volatile matter, fixed carbon, and ash content of biomass, respectively, by dry weight basis.

The infrared spectrum of dried algal biomass and its residue were recorded by Shimadzu FTIR spectroscopy. Both kinds of samples were mixed with potassium bromide (KBr) powder, and then pressed into tablets before measurement. Samples were scanned from 400 to 4,000/cm.

The potential and properties of N. oculata biomass for futuristic renewable fuel have been studied. With traditionally natural and low-cost nutrient cultivation, this algae species grows rapidly. The physicochemical properties of this biomass also indicated that it is feasible as biofuel feedstock, except for its high content of inorganic components, which need special attention. The aforementioned attributes allow N. oculata to be a strong alternative renewable fuel, either by direct combustion under the proper handling for its residue or by co-combustion with other biomass feedstocks, which have low ash content such as rice straw, for reducing ash product. To optimize the usefulness of this biomass related to its productivity and appropriateness of combustion technology, it requires further in-depth research.
Authors’ contributions
Sukarni drafted the manuscript. All authors read and approved the final manuscript.

This work was supported by Directorate General of Higher Education, the Ministry of Education and Culture, Republic of Indonesia; the Fundamental Research Funds, in accordance with the Agreement on Implementation and Assignment Research Program Number 023.04.1.673,453/2012, December 5, 2012, the second revision in May 1, 2013. The authors would like to thank Mrs. Wiwie, Mr. Praptono, and Mr. Sugeng Joko Purnomo from the Institute of Brackish Water Aquaculture (BBAP) Situbondo for facilitating the microalgae cultivation. 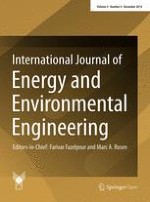 Techno-economic and environmental evaluation of demand side management techniques for rural electrification in Ibadan, Nigeria