The study was undertaken to examine separately the potentiation of the first and second phases of the M wave in biceps brachii after conditioning maximal voluntary contractions (MVCs) of different durations. M waves were evoked in the biceps brachii muscle before and after isometric MVCs of 1, 3, 6, 10, 30, and 60 s. The amplitude, duration, and area of the first and second phases of monopolar M waves were measured during the 10-min period following each contraction. Our results indicated that the amplitude and area of the M-wave first phase increased after MVCs of long (≥ 30 s) duration (P < 0.05), while it decreased after MVCs of short (≤ 10 s) duration (P < 0.05). The enlargement after the long MVCs persisted for 5 min, whereas the depression after the short contractions lasted only for 15 s. The amplitude of the second phase increased immediately (1 s) after all MVCs tested (P < 0.05), regardless of their duration, and then returned rapidly (10 s) to control levels. Unexpectedly, the amplitude of the second phase decreased below control values between 15 s and 1 min after the MVCs lasting ≥ 6 s (P < 0.05). Our results reinforce the idea that the presence of fatigue is a necessary condition to induce an enlargement of the M-wave first phase and that this enlargement would be greater (and occur sooner) in muscles with a predominance of type II fibers (quadriceps and biceps brachii) compared to type-I predominant muscles (tibialis anterior). The unique findings observed for the M-wave second phase indicate that changes in this phase are highly muscle dependent.
× 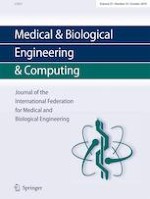