This article explores the modalities by which referring to past discursive performance of adversaries within a continuous polemical exchange is used in ad hominem attacks. Our starting point holds that in the context of lengthy debates, participants and third-party listeners share a rhetorical memory, which, dynamic and subjective as it may be, allows for the evaluation of participants’ characters based on their perceived discursive performances. By analysing opinion articles related to the Israeli political debate, this study shows how drawing inference from adversaries’ prior statements and conduct is used to compromise their credibility as participants in the polemical exchange. It is found that, alongside supporting arguments from inconsistent commitment, previous discursive performance is mobilized to discredit speakers’ epistemic authority (by demonstrating how the adversary’s prior statements were false) and their moral legitimacy (by demonstrating that the adversary failed to act as a fair interlocutor). 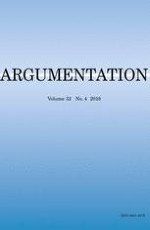 Argument by Multimodal Metaphor as Strategic Maneuvering in TV Commercials: A Case Study

A Normative Pragmatic Theory of Exhorting

Andrea Rocci: Modality in Argumentation—A Semantic Investigation of the Role of Modalities in the Structure of Arguments with an Application to Italian Modal Expressions

The Role of Argument in Negotiation