The exact lifespan of in-use firefighter protective clothing is difficult to predict due to the large variations in use between individual garments. Furthermore, testing methods used to evaluate new protective clothing are destructive in nature and could not be applied to in-use garments. Various non-destructive techniques have been proposed for the evaluation of in-use clothing, each possessing its own advantages and disadvantages. The ability of near-infrared spectroscopy to predict the tensile strength of thermally aged fabrics used in protective clothing for wildland firefighters and other workers is investigated here. Fabrics were exposed to heat fluxes from 10 kW/m2 to 40 kW/m2 for various durations using the cone calorimeter, after which the tensile strength of the fabrics was measured. Temperatures measured during the exposures and results of thermal gravimetric analysis tests were used to interpret changes in tensile strength. Multivariate linear regression was used to develop correlations between the tensile strength and the reflectance values measured between 1500 nm and 2500 nm for new and thermally aged fabrics. It was found that models based on reflectance measurements made at as few as three wavelengths could be used to estimate the tensile strength of the thermally aged specimens. 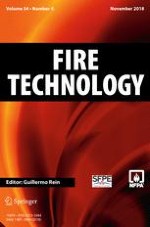