Cellulose-based materials have a great potential in terms of mechanical performance, since crystalline cellulose is known to have excellent stiffness along the main axis. This potential is not completely fulfilled in structural wood materials and in composite materials, due to structural inhomogeneities, misalignment, voids etc. on several length scales. This study investigates the difference in stiffness of nanofibrillated cellulose (NFC) compared to that of cellulose crystallites, based on nanostructural characterization, image analysis and micromechanical modeling. Nanofibrillated cellulose is believed to be composed of a distribution of crystallites in an amorphous matrix, and it is assumed to represent the distribution of the crystalline allomorph Iβ. To predict the elastic properties of NFC, a micromechanical model based on a Mori–Tanaka approach and self-consistent scheme was used. The input data, i.e. orientation distribution, aspect ratio and volume fraction of these crystalline regions, were estimated from image analysis of transmission electron micrographs. The model predicts a ca. 56 % loss of stiffness of NFC compared to that of cellulose crystals along the main axis. 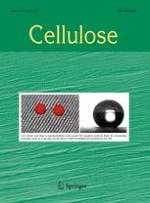