Floating offshore wind turbines (FOWTs) are generally positioned by mooring systems including embedded anchoring foundations and mooring lines. The mooring line consists of three portions: the embedded portion, the lying portion and the suspended portion. Previous studies ignore the embedded and lying portion, and assume the lower end of the suspended chain is fixed at the touchdown point on the seabed. However, the effect of the chain–seabed interaction plays a more important role, especially in the dynamic response of the mooring chain. This article proposes a numerical model for the dynamic response of the mooring chain, considering the dynamic interaction between the mooring chain and the clay and sand sediment. Firstly, the configuration and tension of the mooring chain under monotonic motion of the fairlead are verified against the static model and then the response of the chain under cyclic horizontal drift and vertical heave of the floating facility is investigated. It was found that the chain gradually digs into the deeper soil and become straightened within a few cycles. The dig-in effect leads to the cyclic degradation of the mooring chain tensions and uplift angle at the padeye. The development in the configuration, tension, and angle of the mooring chain under horizontal and vertical motion in clay and sand sediments are compared in this study in order to give practical advice. The effects of embedment depth and soil shear strength are also evaluated. 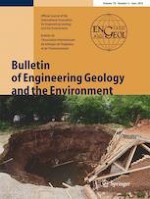 The use of tunnelling parameters and spoil characteristics to assess soil types: a case study from alluvial deposits at a pipejacking project site

Effects of the configuration of a baffle–avalanche wall system on rock avalanches in Tibet Zhangmu: discrete element analysis