Cd1−x Zn x Te (CZT) multilayer films were repeatedly deposited by using RF magnetron sputtering with a Cd0.9Zn0.1Te crystal target. The morphological, structural and optical properties of the CZT multilayer films were characterized. The thickness of the CZT films increases from 1360 to 9230 nm with the increase of the repeated deposition cycles. It is found that the mismatching of the thermal stress between the film and substrate was eliminated by repeated deposition, resulting in an improved adhesion and crystalline quality, larger grain size and decreased microvoids. X-ray diffraction patterns show that the polycrystalline structure CZT films with (111) plane preferred orientation was obtained. The band gap of the CZT films decreases from 1.517 to 1.500 eV resulting from Zinc loss during the repeated deposition and anneal. The density of the disordered state was decreased with the increasing of deposition layers. 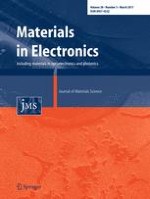 Synthesis and luminescence properties of ZnMoO4:Eu3+,M+(M+ = Li+, Na+ and K+)phosphors