Within this work, a two-component anti-corrosive epoxy primer formulation, Sigmacover™ 280, and its resulting films were prepared and evaluated. The optimum coating time following formulation was extended by adding an appropriate amount of solvent as a controlled thinner. The draw down coating method was identified to be a reproducible and a robust paint film deposition process. Gravimetric analysis, Differential scanning calorimetry (DSC), and through-dry testing were used in the characterization of the curing and drying behavior of each applied primer film. The shortest time for achieving a through-dry state occurred with thinner films cured at the higher temperature, as seen in the film curing/drying. The minimum covercoating time and full cure time of the paint films, cured under the different conditions, were evaluated by means of its dryness, hardness, and curing state studies/characterization. 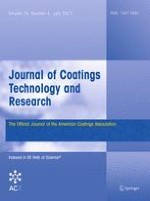