(Na0.5Bi0.5)0.94Ba0.06TiO3 thin films were deposited on Pt/Ti/SiO2/Si (111) substrates by a sol–gel process. The precursor solutions for spin-coating were prepared using ammonia solution and ethanolamine as a ligand, respectively. The phase structure, ferroelectric and dielectric properties were investigated. The X-ray diffraction (XRD) pattern indicated that the thin films are polycrystalline structure. The surface and cross sectional morphology of the thin films was observed by a field-emission scanning electron microscope (FESEM). The dielectric constant and dielectric loss of thin films with ammonia solution as a ligand (NBT-BT-A) are about 600 and 0.03 at 10 kHz at room temperature, while the values for thin films with ethanolamine as a ligand (NBT-BT-E) are about 270 and 0.03. NBT-BT-A film showed a much lower leakage current. The hysteresis loops for NBT-BT-A thin films at an applied electric field of 400 kV/cm were acquired with a higher saturation polarization and a much smaller coercive field comparing to the NBT-BT-E thin films. 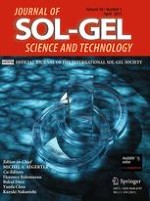 Preparation and characterization of nanocrystalline CoFe2O4 deposited on SiO2: in situ sol–gel process

Comparative study of the structural, optical, and electrical properties of CuAlO2 thin films on Al2O3 and YSZ substrates via chemical solution deposition