Tungsten oxide (WO3) is a well-known photocatalyst, but its application is restricted due to its low conduction band and reduction power. In addition, WO3 catalyst in powder forms has little application prospect because of difficulties in separation and regeneration. In this work, we prepared WO3/Ag/AgCl films on conventional glass that not only have much enhanced photocatalytic capability but also can be readily regenerated. The WO3 film was prepared on glass substrate by calcination of spin-coated W precursor. Ag/AgCl particles were then deposited on WO3 film by an impregnating–precipitation–photoreduction method. The photocatalytic efficiency of WO3/Ag/AgCl was evaluated by using methyl orange (MO) and Rhodamine B (RhB) as target pollutants. The highest photocatalytic performance was achieved with the 3-WO3/Ag/AgCl film, being 18 and 13 times higher than that of pure WO3 film for degradation of MO and RhB, respectively. The degradation rate for both MO and RhB by 3-WO3/Ag/AgCl film catalyst decreased by less than 5% after five cycled tests. The photodegradation mechanism was discussed based on the electrochemical impedance spectroscopy Nyquist tests, photoelectrochemical analysis and reactive oxygen species scavenging experiments. A possible all-solid-state Z-scheme mechanism is proposed based on the photoelectron chemical tests and radical trapping experiments. This study provides a feasible technique to prepare a photocatalytic film with practicability and reproducibility. 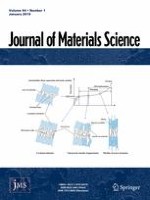 Reclamation of tungsten from carbide scraps and spent materials

Response of microstructure to annealing in in situ Cu–Nb microcomposite

Electrospinning on a plucked string