To address the issue of a pin sliding against a boundary film, we calculate the pressure-dependent shear strength of a bilayer of potassium chloride sandwiched between tungsten carbide (WC) slabs using first-principles, density functional theory (DFT) calculations. It has been shown experimentally that the shear strength S of a KCl film on metal substrates varies with pressure P as S = S 0 + αP, and S 0 = 65 ± 5 MPa and α = 0.14 ± 0.02. Calculations are performed for KCl in contact with the (1\( \bar{1} \)00) and (10\( \bar{1} \)0) faces of WC which have almost square surface unit cells. The effect of pressure is mimicked by varying the distance between the outermost layers of the WC slabs. The DFT calculations confirm that the shear strength depends on pressure and yield average values of S 0 of 70 ± 10 MPa for the WC(1\( \bar{1} \)00) and 51 ± 13 MPa for the WC(10\( \bar{1} \)0) faces, in reasonable agreement with experiment. Since the calculations were performed for a KCl slab in registry with the WC slabs, the agreement with experiment suggests that the atoms at the interface between the tip and film are also in registry. In addition, the calculated and experimental shear strengths are much lower than the shear modulus of KCl, indicating that shear occurs between the tip and film surface without forming a transfer film, in agreement with previous experimental measurements. 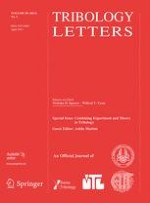 Contact Mechanics and Friction on Dry and Wet Human Skin

Progress in Tribology Through Integrated Simulations and Experiments