» Zur Zusammenfassung PDF-Version jetzt herunterladen
Wichtige Hinweise
We thank the referees and the editor for very helpful and detailed comments. Although we are jointly responsible for this work, Christian List wishes to note that Franz Dietrich should be considered the lead author, to whom the credit for the present mathematical proofs is due. This paper is the first of two self-contained, but technically related companion papers inspired by binary judgment-aggregation theory. Both papers build on our earlier, unpublished paper ‘Opinion pooling on general agendas’ (September 2007). Dietrich was supported by a Ludwig Lachmann Fellowship at the LSE and the French Agence Nationale de la Recherche (ANR-12-INEG-0006-01). List was supported by a Leverhulme Major Research Fellowship (MRF-2012-100) and a Harsanyi Fellowship at the Australian National University, Canberra.

This paper addresses the problem of probabilistic opinion pooling. Suppose several individuals (e.g., decision makers or experts) each assign probabilities to some events. How can these individual probability assignments be aggregated into a collective probability assignment, while preserving probabilistic coherence? Although this problem has been extensively studied in statistics, economics, and philosophy, one standard assumption is seldom questioned: the set of events to which probabilities are assigned—the agenda—is a \(\sigma \)-algebra: it is closed under negation (complementation) and countable disjunction (union) of events. In practice, however, decision makers or expert panels may not be interested in such a rich set of events. They may be interested, for example, in the probability of a blizzard and the probability of an interest-rate increase, but not in the probability of a blizzard or an interest-rate increase. Of course, the assumption that the agenda is a \(\sigma \)-algebra is convenient: probability functions are defined on \(\sigma \)-algebras, and thus one can view probabilistic opinion pooling as the aggregation of probability functions. But convenience is no ultimate justification. Real-world expert committees typically do not assign probabilities to all events in a \(\sigma \)-algebra. Instead, they focus on a limited set of relevant events, which need not contain all disjunctions of its elements, let alone all disjunctions of countably infinite length.
There are two reasons why a disjunction of relevant events, or another logical combination, may not be relevant. Either we are not interested in the probability of such ‘artificial’ composite events. Or we (or the decision makers or experts) are unable to assign subjective probabilities to them. To see why it can be difficult to assign a subjective probability to a logical combination of ‘basic’ events—such as ‘a blizzard or an interest-rate increase’—note that it is not enough to assign probabilities to the underlying basic events: various probabilistic dependencies also affect the probability of the composite event, and these may be the result of complex causal interconnections (such as the causal effects between basic events and their possible common causes).
Anzeige
We investigate probabilistic opinion pooling for general agendas, dropping the assumption of a \(\sigma \)-algebra. Thus any set of events that is closed under negation (complementation) can qualify as an agenda. The general notion of an agenda is imported from the theory of binary judgment aggregation (e.g., List and Pettit 2002, 2004; Pauly and van Hees 2006; Dietrich 2006; Dietrich and List 2007a, 2013; Nehring and Puppe 2010; Dokow and Holzman 2010; Dietrich and Mongin 2010). We impose two axiomatic requirements on probabilistic opinion pooling:
(i)
the familiar ‘independence’ requirement, according to which the collectively assigned probability for each event should depend only on the probabilities that the individuals assign to that event;
(ii)
the requirement that certain unanimous individual judgments should be preserved; we consider stronger and weaker variants of this requirement.
We prove two main results: We state three versions of each result, which differ in the nature of the unanimity-preservation requirement and in the class of agendas to which they apply. Our results generalize a classic characterization of linear pooling in the special case where the agenda is a \(\sigma \)-algebra (Aczél and Wagner 1980 and McConway 1981). 1 For a \(\sigma \)-algebra, every neutral pooling function is automatically linear, so that neutrality and linearity are equivalent here (McConway 1981 and Wagner 1982). 2 As we will see, this fact does not carry over to general agendas: many agendas permit neutral but non-linear opinion pooling functions.
Some of our results apply even to agendas containing only logically independent events, such as ‘a blizzard’ and ‘an interest-rate increase’ (and their negations), but no disjunctions or conjunctions of these events. Such agendas are relevant in practical applications where the events in question are only probabilistically dependent (correlated), but not logically dependent. If the agenda is a \(\sigma \)-algebra, by contrast, it is replete with logical interconnections. By focusing on \(\sigma \)-algebras alone, the standard results on probabilistic opinion pooling have therefore excluded many realistic applications.
We also present a new illustrative application of probabilistic opinion pooling, namely to probabilistic preference aggregation. Here each individual assigns subjective probabilities to events of the form ‘ x is preferable than y’ (or ‘ x is better than y’), where x and y range over a given set of alternatives. These probability assignments may be interpreted as beliefs about which preferences are the ‘correct’ ones (e.g., which correctly capture objective quality comparisons between the alternatives). Alternatively, they may be interpreted as vague or fuzzy preferences. We then seek to arrive at corresponding collective probability assignments.
Each of our linearity or neutrality results (with one exception) is logically tight: the linearity or neutrality conclusion follows if and only if the agenda falls into a relevant class. In other words, we characterize the agendas for which our axiomatic requirements lead to linear or neutral aggregation. We thereby adopt the state-of-the-art approach in binary judgment-aggregation theory, which is to characterize the agendas leading to certain possibilities or impossibilities of aggregation. This approach was introduced by Nehring and Puppe ( 2002) in related work on strategy-proof social choice and subsequently applied throughout binary judgment-aggregation theory. One of our contributions is to show how it can be applied in the area of probabilistic opinion pooling.
Anzeige
We conclude by comparing our results with their analogues in binary judgment-aggregation theory and in Arrovian preference aggregation theory. Interestingly, the conditions leading to linear pooling in probability aggregation correspond exactly to the conditions leading to a dictatorship of one individual in both binary judgment aggregation and Arrovian judgment aggregation. This yields a new unified perspective on several at first sight disparate aggregation problems.

We now introduce some requirements on opinion pooling functions.

Our first requirement, familiar from the literature, says that the collective probability of each event in the agenda should depend only on the individual probabilities of that event. This requirement is sometimes also called the weak setwise function property.
Independence For each event \(A\in X\), there exists a function \(D_{A}:[0,1]^{n}\rightarrow [0,1]\) (the local pooling criterion for A) such that, for all \(P_{1},\ldots ,P_{n}\in {\mathcal {P}}_{X}\),
$$\begin{aligned} P_{P_{1},\ldots ,P_{n}}(A)=D_{A}(P_{1}(A),\ldots ,P_{n}(A)). \end{aligned}$$
One justification for independence is the Condorcetian idea that the collective view on any issue should depend only on individual views on that issue. This reflects a local, rather than holistic, understanding of aggregation. (On a holistic understanding, the collective view on an issue may be influenced by individual views on other issues.) Independence, understood in this way, becomes less compelling if the agenda contains ‘artificial’ events, such as conjunctions of intuitively unrelated events, as in the case of a \(\sigma \)-algebra. It would be implausible, for instance, to disregard the individual probabilities assigned to ‘a blizzard’ and to ‘an interest-rate increase’ when determining the collective probability of the disjunction of these events. Here, however, we focus on general agendas, where the Condorcetian justification for independence is more plausible.
There are also two pragmatic justifications for independence; these apply even when the agenda is a \(\sigma \)-algebra. First, aggregating probabilities issue-by-issue is informationally and computationally less demanding than a holistic approach and thus easier to implement in practice. Second, independence prevents certain types of agenda manipulation—the attempt by an agenda setter to influence the collective probability assigned to some events by adding other events to, or removing them from, the agenda. 6 Nonetheless, independence should not be accepted uncritically, since it is vulnerable to a number of well-known objections. 7

4 When is opinion pooling neutral?

We now show that, for many agendas, the neutral pooling functions are the only pooling functions satisfying independence and consensus preservation in either its original form or one of the strengthened forms. The stronger the consensus-preservation requirement, the larger the class of agendas for which our characterization of neutral pooling holds. For the moment, we set aside the question of whether independence and consensus preservation imply linearity as well as neutrality; we address this question in the next section.

5 When is opinion pooling linear?

As we have seen, for many agendas, only neutral pooling functions can satisfy our two requirements. But are these functions also linear? As we now show, the answer depends on the agenda. If we suitably restrict the class of agendas considered in part (a) of each of our previous theorems, we can derive linearity rather than just neutrality. Similarly, we can expand the class of agendas considered in part (b) of each theorem, and replace non-neutrality with non-linearity.

We now prove all our results. In light of the mathematical connection between the present results and those in Part II on ‘premise-based’ opinion pooling for \(\sigma \)-algebra agendas, one might imagine two possible proof strategies: either one could prove our present results directly and those in Part II as corollaries, or vice versa. In fact, we will mix those two strategies. We will prove the parts (a) of all present theorems directly (and use them in Part II to derive corresponding results), while we will prove the parts (b) of present theorems sometimes directly and sometimes as corollaries of corresponding results from Part II.
This Appendix is organised as follows. In Sects. A.1–A.5, we prove parts (a) of Theorems  2– 6, along with related results. Theorem  1(a) requires no independent proof, as it follows from Theorem  2(a). In Sect. A.6, we clarify the connection between the two papers, and then prove parts (b) of all present theorems. Finally, in Sect. A.7, we prove Propositions  1 and 2. 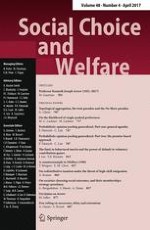 On the likelihood of single-peaked preferences

A counterexample to Dhillon (1998)