The reconstruction of triggering conditions, geomorphic effects, and damage produced by historical floods and debris flows significantly contributes to hazard assessment, allowing improved risk mitigation measures to be defined. Methods for the analysis of historical floods and debris flows vary greatly according to the type and quality of available data, which in turn are influenced by the time the events occurred. For floods and debris flows occurring in the Alps a few decades ago (between about 1950 and 1980), the documentation is usually better than for previous periods but, unlike events of most recent years, quantitative data are usually scanty and the description of the events does not aim to identify processes according to current terminology and classifications. The potential, and also the limitations of historical information available for the reconstruction of historical debris flows in the Alps have been explored by analyzing a high-magnitude debris flow that occurred on November 4, 1966 in the Chieppena Torrent (northeastern Italy). Reconstruction of the event was based on the use of written documentation, terrestrial and aerial photographs, and geomorphological maps. The analysis aimed to define the temporal development of phenomena, recognizing the type of flow processes and assessing some basic flow variables, such as volume, channel-debris yield rate, erosion depth, total distance traveled, and runout distance on the alluvial fan. The historical development of torrent hydraulic works, both before and after the debris flow of November 1966, was also analyzed with regard to the technical solutions adopted and their performance. 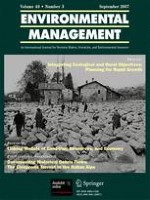 Linking Models of Land Use, Resources, and Economy to Simulate the Development of Mountain Regions (ALPSCAPE)

The Contribution of Environmental Assessment to Sustainable Development: Toward a Richer Empirical Understanding