Time-resolved planar laser-induced fluorescence imaging of the scalar concentration field of a round jet was performed in this study, together with proper orthogonal decomposition (POD) analysis to extract the spatial pattern and spatio-temporal evolution of the dominant structures of unsteady behavior from the large image data. Particular attention was paid to ensuring quantitative representation of the dynamically varying concentration field. Three Reynolds numbers based on the nozzle diameter \(D\) and the bulk velocity \(U_{j}\) were compared, i.e., \(Re\) = 2400, 3000, and 6000. The preliminary instructive view of the jet characteristics at these three Reynolds numbers was first obtained from the instantaneous and time-mean concentration field, the concentration fluctuation intensity fields, and then the cross correlation of the concentration field. In the POD analysis, five regions, each overlapping its neighbor by 50%, were carefully chosen for the close-up view of the locally unsteady behavior. The POD mode results convincingly reflected the helical mode in the jet at \(Re\) = 2400; both the helical and the axisymmetric modes buried in the jets at \(Re\) = 3000 and 6000 were recognized. This confirmed that the axisymmetric mode decayed rapidly beyond the \(x/D\) = 4 station, while the helical mode dominated the far field. The POD mode captured the streamwise oscillation of the transition location at \(Re\) = 2400 and 3000, which has relatively large energy among all the POD modes. The mode coefficients indicated a wide range of dominant frequencies in relation to the organized motions, and also the frequency decay in the downstream direction. Finally, each instance of energetic behavior superimposed in the highly unsteady jets was separately revealed through low-order reconstruction of the specified POD modes, shedding light on its global variation throughout the whole field. 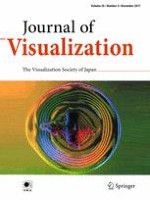 Frontier of Information Visualization and Visual Analytics in 2016