The characteristics of argon oxygen decarburization slag (AODS) for smelting stainless steel that has been aged for 10 years were analyzed. Three types of AODSs distributed at three positions in a slag heap were sampled for comparison experiments. Chemical analysis, mineral phase identification, thermogravimetric analysis, and micromorphology analysis were used to study the element migration trends and carbonation behavior of AODS after long-term aging. Sequential leaching tests were performed to study the chromium leachability of the aged AODS. The results show that during the long-term aging process, the AODS heap had undergone oxidation and carbonation, accompanied by element migration and mineralogical evolution. The surface slag had the highest degree of carbonation but the weakest chromium leachability. The chemical composition of the middle slag was the closest to that of the original slag. In the bottom steel slag, in addition to magnesium, certain depositions of other elements were present. The matrix phases in the aged slag were dicalcium silicate and merwinite, and the chromium was mainly wrapped in these matrix phases in the form of oxides, spinels, or alloys. Under the combined effects of carbonation and oxidation, the leaching characteristics of the chromium in the aged slag varied greatly depending on the location. The bottom slag had the strongest chromium leachability, and the hexavalent chromium had long-term continuous leachability. 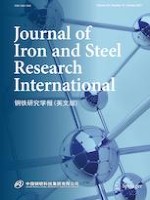 Effect of Ce on solute redistribution in liquid ahead of solid–liquid interface during solidification of Fe–4 wt.%Si alloy