Much research has shown that a science teacher’s beliefs are related to their teaching practice. This line of research has often defined “belief” epistemologically. That is, beliefs are often defined relative to other mental constructs, such as knowledge, dispositions, or attitudes. Left unspecified is the role beliefs play in cognition and how they come to influence science teachers’ classroom practice. As such, researchers and science teacher educators have relied on an (at times, implicit) assumption that there is a direct causal relationship between teachers’ beliefs and classroom practice. In this paper, we propose an operational, as opposed to epistemological, definition of belief. That is, we are explicit about the role a belief plays in science teachers’ cognition and how that leads to classroom practice. We define a belief as a mental representation that influences the practice of a teacher if and only if the belief is active in cognition. We then turn our attention to two limitations in the literature on that have arisen via previous definitions and assumptions regarding science teacher beliefs, showing how defining beliefs operationally helps think about these issues in new ways. The two limitations surround: (1) the difficulty in precisely delineating belief from knowledge; and (2) the interconnectedness of beliefs such that they draw meaning from one another. We then show how our definition of beliefs is congruent with other models of teacher cognition reported in the literature. Finally, we provide implications arising from this definition of belief for both science teacher educators and those who conduct research on the beliefs of both preservice and in-service science teachers. 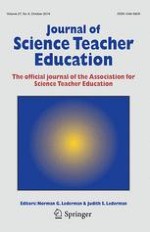 What is the Role of Science Teacher Education in Times Such as These?