Psychometric theory relies on two basic assumptions: (a) psychological constructs refer to latent (unobservable) variables and (b) psychological tests serve as a way to measure these constructs. This view is complemented by an alternative interpretation of psychological constructs, which neither relies on latent variables nor on the concept of measurement. Using the formal apparatus of many-valued logic, psychological constructs are re-interpreted as linguistic concepts (rather than latent variables), which can be inferred by means of logical calculus (as opposed to measurement). Thus, test scores do not refer to the values of latent variables, but to the degree to which the necessary and sufficient conditions for the ascription of a construct are fulfilled. Following this rationale, a formal theory of psychological tests is developed, which models the process of testing as logical inference. Applying the derived procedures, a person’s testing behaviour yields the degree to which a construct describes her adequately. 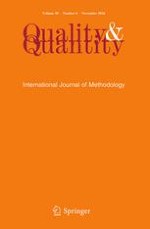 Childhood and capability deprivation in Italy: a multidimensional and fuzzy set approach

The tale of two expectations

Perceptions and practices of corporate social responsibility among SMEs in Pakistan

In the end, will we all be Europeans? A two-phase analysis of citizens’ sentiment towards the EU

On the reliability of unitizing textual continua: Further developments