Since World War II a large literature has arisen that uses the methodology of economics to examine the behavior of governments and the actors in them. Some scholars refer to their research as public choice, some as social choice, and still others as political economy. This article discusses the distinctions among these three terms. It concludes that all of the research falling under these three headings has much in common, and that people who refer to their work as public choice or political economy are essentially employing identical methodologies. Contributions to public choice, narrowly defined, are more often positive and empirical analyses of government behavior than those in social choice, narrowly defined. 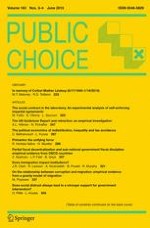 On the relationship between corruption and migration: empirical evidence from a gravity model of migration

Does social distrust always lead to a stronger support for government intervention?