Thermochemical conversion (pyrolysis) of used tyres as a method of solid waste treatment and its beneficiation to value-added products (such as liquid fuel) was investigated in this study. A chemical vapour deposition reactor was used for the tyre pyrolysis, and effects of operating variables on the process were studied. Operating variables were the tyre feed mass and size, heating rate, and temperature. The operating parameters were also optimized to yield an optimum yield of 34.03 wt% for the liquid product (pyrolytic oil) at operating temperature of 600 °C at a heating rate of 15 °C/min for a feed particle size of 6 mm. A detailed characterization of the pyrolytic oil was performed using Fourier transform infrared (FTIR), nuclear magnetic resonance (NMR), and gas chromatography–mass spectrometry (GC–MS). Results obtained reveal the pyrolytic oil to be a complex mixture, mainly of aliphatic and aromatic compounds, which can serve as a feedstock in industrial application. In addition, the physicochemical properties of the oil were comparable to that of the conventional fossil fuel oil, implying the possibility of the used tyres as an alternative source of liquid fuel. 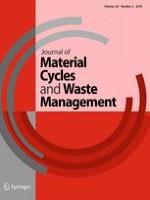 The development of landfill operation and management in Indonesia