Karst aquifer components that contribute to the discharge of a water supply well in the Classical Karst (Kras) region (Italy/Slovenia) were quantitatively estimated during storm events. Results show that water released from storage within the epikarst may comprise as much as two-thirds of conduit flow in a karst aquifer following rainfall. Principal components analysis (PCA) and end-member mixing analysis (EMMA) were performed using major ion chemistry and the stable isotopes of water (δ18O, δ2H) and of dissolved inorganic carbon (δ13CDIC) to estimate mixing proportions among three sources: (1) allogenic river recharge, (2) autogenic recharge, and (3) an anthropogenic component stored within the epikarst. The sinking river most influences the chemical composition of the water-supply well under low-flow conditions; however, this proportion changes rapidly during recharge events. Autogenic recharge water, released from shallow storage in the epikarst, displaces the river water and is observed at the well within hours after the onset of precipitation. The autogenic recharge end member is the second largest component of the well chemistry, and its contribution increases with higher flow. An anthropogenic component derived from epikarstic storage also impacts the well under conditions of elevated hydraulic head, accounting for the majority of the chemical response at the well during the wettest conditions. 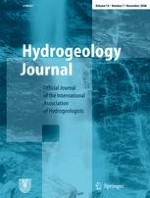 Study of geothermal water intrusion due to groundwater exploitation in the Puebla Valley aquifer system, Mexico

Comments on the article “Determination of groundwater availability in shallow arid region aquifers utilizing GIS technology: a case study in Hada Al-Sham, Western Saudi Arabia” by A. S. El-Hames and K. A. Al-Ahmed (Hydrogeology Journal (2005), Volume 13, No.4, p 640–648, and Erratum in Volume 13, No. 4, p 649).

Tracer tests, hydrochemical and microbiological investigations as a basis for groundwater protection in a remote tropical mountainous karst area, Vietnam