This paper presents an analysis of water resources management under climate change in Southern European River Basin Districts. The analysis is based on the Water Availability and Adaptation Policy Analysis (WAAPA) model, which focuses on the quantitative evaluation of maximum potential water withdrawal for different types of demands. The Water Availability and Adaptation Policy Analysis model performs the simulation of water resources systems at the monthly time scale and allows the estimation of the demand-reliability curve in every subbasin of the river network. Over sixty River Basin Districts of Southern Europe have been analyzed, taking basic information from publicly available databases: basin topology from the Hydro1K database, average runoff from the University of New Hampshire Global Runoff Data Centre (GRDC) composite runoff field, population from the Global Rural–urban Mapping Project (GRUMP) and irrigation area from the Global Map of Irrigated Area dataset. Streamflow monthly time series were obtained from the results of the ENSEMBLES project in four climate scenarios for time horizon 2070–2100. Climate change vulnerability of irrigation demands is estimated from changes in maximum potential water withdrawals for irrigation in current and future scenarios. Maximum potential water withdrawal for irrigation was computed as the largest value of irrigation demand that could be supplied with a given reliability requirement once the existing urban demand is adequately satisfied. The results show significant regional disparities in vulnerability to climate change in the irrigation sector across Europe. The greatest vulnerabilities have been obtained for Southwest Europe (Iberian Peninsula) and some basins in Italy and Greece. 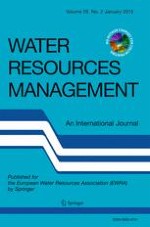 A Systems Approach to Understanding the Evolution of the Agro-Social-Ecological System of the Upper Rio Grande-San Luis Valley, Colorado

The Delta Model for Fresh Water Policy Analysis in the Netherlands