Phase transition process in aqueous solutions of poly (vinyl methyl ether) (PVME)/poly (2-ethyl-2-oxazoline) (PEtOx) mixtures was investigated by elastic light scattering (ELS) spectroscopy. The two temperatures of phase transition in solutions during heating were identified, corresponding to different lower critical solution temperatures of PVME and PEtOx. The ELS spectra revealed the aggregation of molecular chains in the course of phase transition. It was found that PVME chains collapsed and aggregated during heating. Afterward, the PEtOx chains began to aggregate. In contrast, during cooling, the PEtOx aggregates were initially swelled and followed by partial dissociation. This was probably because that the PVME aggregates formed in solution might sterically hinder the further swelling and dissociation of the PEtOx aggregates. Subsequently, the aggregates of PVME chains and the independent PEtOx aggregates swelled and dissociated, while the conformation of molecular chains finally returned to its original state. In view of the phase transition behavior of PVME/PEtOx solutions, the mixtures of two thermosensitive polymers might be used to develop new polymeric materials possibly applied in fields such as drug delivery, biosensor, and bioseparation. Moreover, a model was proposed to describe the phase transition process. 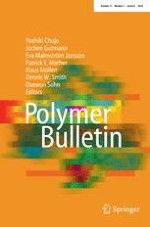