Under certain conditions, strain rate sensitive materials such as dual phase steels, show formability improvement under high strain rate forming which is known as hyperplasticity. In this research, two commercial dual phase steel sheets, DP500 and DP780, were formed under quasi-static conditions using the Nakazima test and under high strain rate conditions by electrohydraulic forming (EHF) into a conical die. Macro-strains, measured from electro-etched circle grids with an FMTI analyzer, showed remarkable formability improvement in EHF specimens. Micro-strains, i.e., the strains in the ferrite and the martensite, were calculated by quantitative metallography of more than 7000 ferrite grains and 10,500 martensite islands. The goal was to investigate the deformation improvement of the constituents under EHF. Around 20 and 100% deformation improvements were observed in ferrite and martensite, respectively. Furthermore, as a micro-mechanical modeling technique, correlation of the micro-strains with the macro-strains was investigated by applying the mixture rule. Results showed a reasonable correlation between the macro and micro-scale strains; however in banded microstructures, the strain in the martensite should be determined precisely for more accuracy. 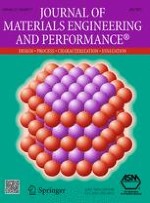