Gait disturbances are common in the rat model of Parkinson’s disease (PD) by administrating 6-hydroxydopamine. However, few studies have simultaneously assessed spatiotemporal gait indices and the kinematic information of PD rats during overground locomotion. This study utilized a simple, accurate, and reproducible method for quantifying the spatiotemporal and kinematic changes of gait patterns in hemiparkinsonian rats. A transparent walkway with a tilted mirror was set to capture underview footprints and lateral joint ankle images using a high-speed and high-resolution digital camera. The footprint images were semi-automatically processed with a threshold setting to identify the boundaries of soles and the critical points of each hindlimb for deriving the spatiotemporal and kinematic indices of gait. Following PD lesion, asymmetrical gait patterns including a significant decrease in the step/stride length and increases in the base of support and ankle joint angle were found. The increased footprint length, toe spread, and intermediary toe spread were found, indicating a compensatory gait pattern for impaired locomotor function. The temporal indices showed a significant decrease in the walking speed with increased durations of the stance/swing phase and double support time, which was more evident in the affected hindlimb. Furthermore, the ankle kinematic data showed that the joint angle decreased at the toe contact stage. We conclude that the proposed gait analysis method can be used to precisely detect locomotor function changes in PD rats, which is useful for objective assessments of investigating novel treatments for PD animal model. 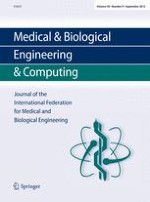 Clinical use of laser speckle techniques: beyond the sole mapping