In this paper, we proposed a scheme for quantum information splitting of arbitrary two-qubit by using four-qubit cluster state and Bell-state as quantum channel. The splitter (Alice) and two receivers (Bob and Charlie) safely share a four-qubit cluster and Bell-state as quantum channel. Then, the sender Alice first performs Bell-state measurement (BSMs) on her qubit pairs, respectively, and tells the results to the receiver Bob and Charlie via a classical channel. But it is impossible for Bob to reconstruct the original state with local operations without help from Charlie. If Charlie allows Bob to reconstruct the original state information, he also needs to perform BSMs on his qubits and tell Bob the measurement result. Using the measurement results from Alice and Charlie, Bob can reconstruct the original state by applying the appropriate unitary operation. The scheme is tested against various attack scenarios such as eavesdropping attack, eavesdropping in the presence of a malicious attacker and even in the presence of a dishonest agent and found to be secure in all these cases. In addition, the deterministic quantum information splitting of arbitrary two-qubit state in cavity quantum electrodynamics is implemented. 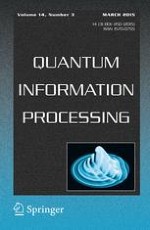 Two-step measurement of the concurrence for hyperentangled state