In this paper, we investigate the relationship of quantum teleportation in quantum information science and the Birman–Murakami–Wenzl (BMW) algebra in low-dimensional topology. For simplicity, we focus on the two spin-1/2 representation of the BMW algebra, which is generated by both the Temperley–Lieb projector and the Yang–Baxter gate. We describe quantum teleportation using the Temperley–Lieb projector and the Yang–Baxter gate, respectively, and study teleportation-based quantum computation using the Yang–Baxter gate. On the other hand, we exploit the extended Temperley–Lieb diagrammatical approach to clearly show that the tangle relations of the BMW algebra have a natural interpretation of quantum teleportation. Inspired by this interpretation, we construct a general representation of the tangle relations of the BMW algebra and obtain interesting representations of the BMW algebra. Therefore, our research sheds a light on a link between quantum information science and low-dimensional topology. 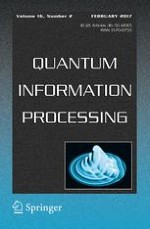 Cryptanalysis and improvement of a quantum private set intersection protocol