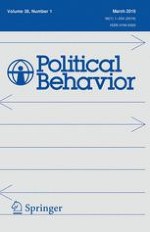 Trusting the State, Trusting Each Other? The Effect of Institutional Trust on Social Trust

Liberellas Versus Konservatives: Social Status, Ideology, and Birth Names in the United States

Schools or Pools of Democracy? A Longitudinal Test of the Relation Between Civic Participation and Political Socialization

Public Attitudes Toward Immigration Policy Across the Legal/Illegal Divide: The Role of Categorical and Attribute-Based Decision-Making

Participation in the Wake of Adversity: Blame Attribution and Policy-Oriented Evaluations